Tin Woof Inn officially began in Phoenix, Arizona, in 2001. The next generation Tin Woof Inn started in Morehead in 2007. Our success in Morehead led to building and operating TWI Ashland in 2014. After looking at more than 10 other cities in Kentucky, we built the Frankfort facility, which opened in 2019. Both Scott and Gale are actively involved in the day-to-day operations, marketing and maintenance of all three facilities. 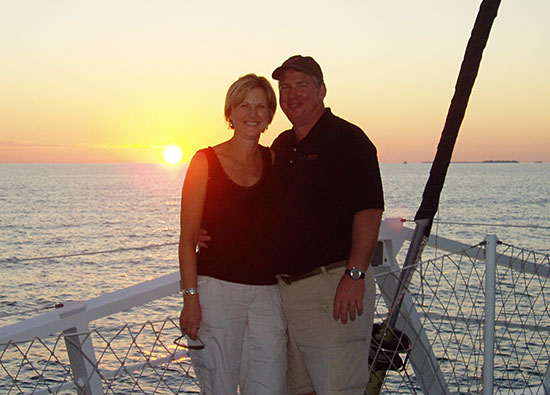 Scott and Gale Templeton both had successful careers in corporate America prior to focusing their skills in the pet industry. Scott was a division manager for 7-Eleven and held senior operating and marketing positions with Tosco, Phillips 66, Conoco Phillips, Shell UK and Mobil. He did consulting work on four continents for Shell International, Exxon Mobil and ERG Petroli. He did strategic marketing work for GTech and Intellimat, an $18-million Virginia start-up. He started his professional pet career in 1993 with Petropolis, a $2-million-a-year, 22,000 square-foot facility, capable of boarding more than 300 pets daily. Over the years, he has designed, built or operated nearly 20 professional pet facilities, including the Rowan County Animal Shelter and the Boyd County Animal Shelter. In his career, he has supervised more than 260,000 pet stay days.

Gale Templeton began her professional career with grocery facilities. She worked for Kroger and other grocery companies in a retail, wholesale and vendor role. While at Kroger, she served as a store manager and moved into a corporate merchandising role. She also worked in sales and marketing in the staffing industry and the food service and supply industry. In 1994, Gale joined Petropolis in a management and marketing role, overseeing nearly 10 PetCare Advisors on staff, the Grooming Academy School and Hidden Fencing Division.

Her dog Asa (ASCA CH, ATCH Shalako’s Windchaser) is a ASCA Hall Of Fame Sire. He has direct off-spring that have garnered more than 22 advanced titles in five competitive disciplines. Her dog Yuma (Asa’s son) is a North American Dog Agility Council Hall of Fame Competitor, with six Champion Agility titles to his credit. Gale has 16 and counting agility championships to her credit.

Gale has competed in conformation (U.S. and U.K.) and titled in competitive obedience, rally, herding, barn hunt, dock dogs and agility. Gale has qualified and participated in ASCA Nationals and NADAC Championships 10 times. Over the years, Gale has put more than 100 titles on the dogs. She has been conducting training classes at Tin Woof Inn since 2007.

Click any image above to view all in lightbox.